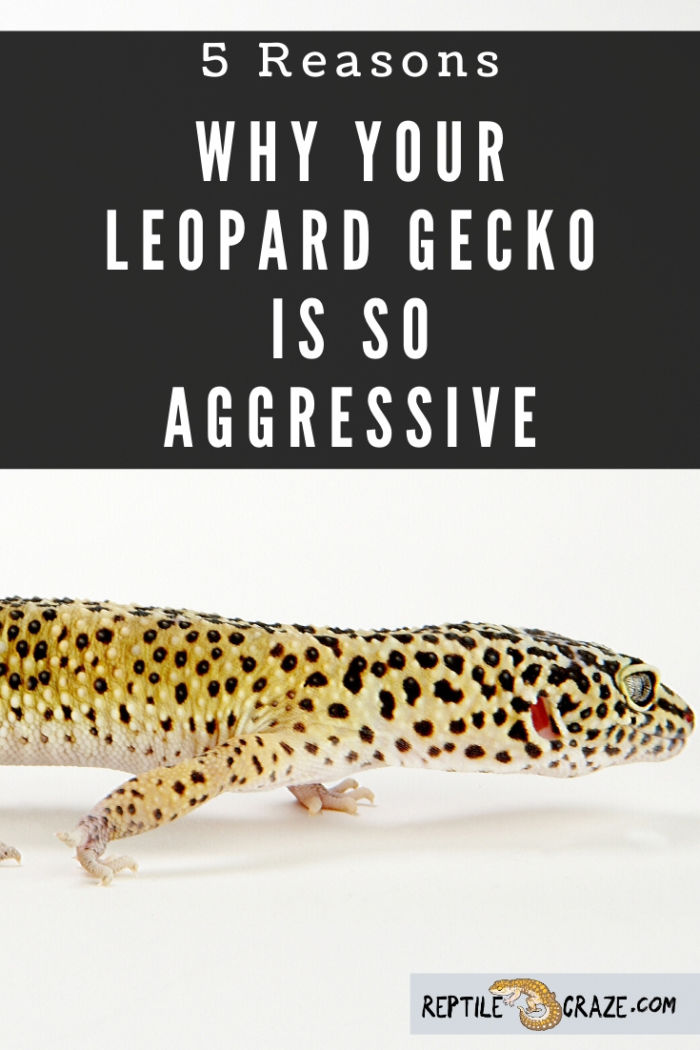 What we view as aggressive behavior is your leopard gecko being defensive!

So why is your leopard gecko so aggressive? To lessen their hostile attitude you have to figure out what is agitating them to the point where they feel that they need to defend themselves. This could either because they are simply not used to you to it’s just their breeding time. Temperature can even affect their mood since they need a spectrum instead of a set climate.

Some aggressive behaviors are aggressive, like charging and hissing, but what tail pattern means that they are angry or just hanging out? Read further for aggression signs and 5 of their reasons, with help to let your little guy just relax.

Signs your gecko is being aggressive or defensive

Differentiating your leopard gecko’s behavior between happy and defensive will be difficult for a novice. Some behaviors are obvious, like charging at you with their mouth open.

These types of geckos can even hiss or scream, so when it’s vocals are directed at you it’s not because they are screaming for joy to see you. If you have recently added a leopard lizard to your home the thought of why did I do this if they don’t like me might have crossed your mind.

Your gecko lizard might not bond instantly with you like say a dog would, but that doesn’t mean they aren’t capable of “affection”. You just have to take it slow with them. We explain how friendly they are and what you should expect here.

Understanding their particular aggression language is the first step to trust and saving your fingers.

Another common antagonistic move by this gecko is crouching low to the ground and with its tail standing on end moving in an ‘S’ pattern. When your leopard gecko does this and moves their tail from side to side then don’t make any sudden movements.

They could see this as aggressive behavior on your part and they will be forced to act. Leave them alone for a little while and then return to the tank slowly. If they are still on guard give them time.

Some other defensive behavior to look out for:

Until they stop acting this way only interact with them during feeding and cleaning times. They are loners by nature so it won’t hurt their feelings and it gives them the space to feel comfortable.

Note, tail dropping is done during elevated levels of stress. It means that your lizard feared for its life and as a defense, it dropped its tail to hopefully distract whatever was trying to attack it.

If you were in attendance when this happens to take that as a sign to not do whatever caused the tail dropping if you can help it. 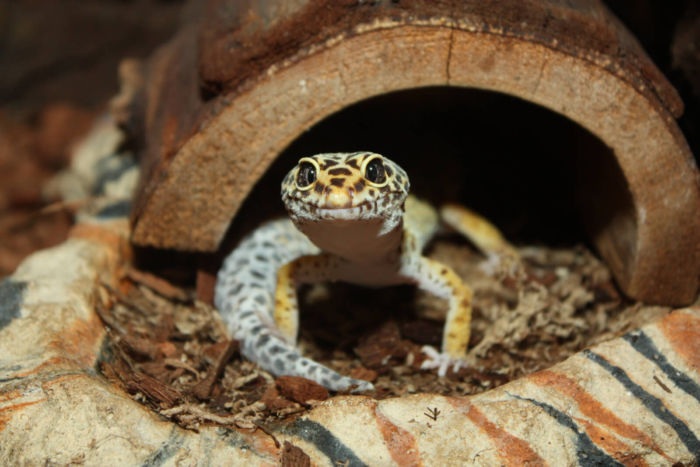 5 reasons why your leopard gecko is so aggressive

Reading the above might have clued you in the one the main reason’s why your leopard gecko is acting aggressively. If they are displaying all of the defensive behaviors whenever you enter the room then it’s you that has them riled up.

While some leopard geckos stay feisty, the vast majority of them can be trained to interact with their humans. Part of that training is doing what you would ordinarily. Feeding and Cleaning.

Leopard geckos are an amenable reptile, which is why are recommended for people who have little experience.

That being said they still need the time to get used to you handling them and disturbing their sleep since they are crepuscular, they wake at dawn and dusk, especially if they are young.

When it comes to getting a leopard gecko accustom to your presence you need to go nice and slow. They are cute but don’t get one and then expect to handle it immediately.

At first, the only interactions that you need to have with your gecko is during feeding and tank cleaning. During this beginning phase just work on getting them acquainted with your presence. If they run away don’t reach in after them, let them have control of the situation.

Keep this up until you see that they are calming down around you. Now we want them to become familiar with handling. Like gaining a new dog or cat trust if they are hesitant of you just put your hand towards them.

It’s easier if you put your hand on the bottom of the tank after you have cleaned it. Leaving your hand there provides three things:

Allow them to decide how to act next, if you have played your cards right then they will come over and lick your hand, or just run away. If they get defensive then leave them alone for a bit and then check back later to see if they have settled down.

Let them initiate each step so that the process isn’t rushed. After they are calm with your hand in their tank, play with them.

After a while, you can get them to be used to be held and maybe even stroked softly. You just have to be patient.

If the aggressive behaviors aren’t towards you but inflicted on a tank mate then we need to check if it’s a dominance issue. Leopard geckos can be quiet territorial with each other, being loners out in nature.

If you have the means can you can keep them alone in their separate tanks. It will not hurt their feelings and they will feel the king or queen of their small kingdom.

If you see them displaying the aforementioned behavior towards each other they are just contesting for the territory. Leopard geckos will also fight each other by biting tails, they might even throw in some slaps in the mix.

The gender of the lizards doesn’t matter. Female leopard geckos will display territorial behavior as swiftly as the males. Age isn’t a factor either, both young and old will fight, though the young ones tend to be a bit more aggressive.

Some reasons why your leopard geckos are trying to assert control are obvious. Such as when you have just introduced a new lizard to the tank. Or if you have multiple lizards and it is mating season. Some reasons could be less obvious like changes in their environment.

Leopard geckos are cute, but they can hurt each other. It’s a clever idea to have an extra tank on hand in case you need to separate them. If it is a slight chance they will get over the issue after a few days, however sometimes your two lizards just don’t get along.

It wouldn’t be a terrible thing to house them separately. In fact, we created an article to show you why you should never get a partner for your Leopard gecko here – you should read it! 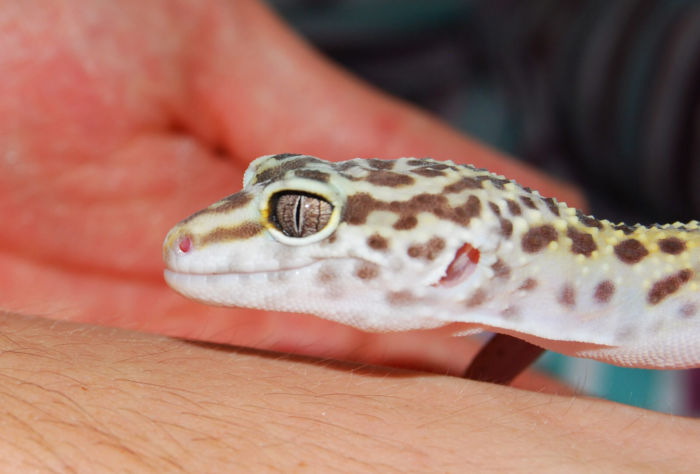 If your leopard gecko is displaying aggressive behaviors all by themselves and you can tell it isn’t directed towards you it could be a temperature issue.

Leopard geckos are originally from the Middle East and parts of India. Their natural habitat is dry and hot, while the nights can get down to freezing.

They are habituated to varying temperatures. Your gecko is ectothermic so they will only perk up if they have time to soak up some heat. The temperature of the tank is essential to their happiness. There need to be three different temperature areas in the leopard gecko’s tank.

The recommended tank temperatures are 75 -80°F on the cold end and 80-85°F on the high end. It is also suggested that you provide a hot section, called the basking area provided by a light fixture that is 90-95°F.

During the nighttime, they prefer a drop in temperature so there is no need for a nighttime light.

If the leopard gecko does not have the range of temperatures they will grow lethargic and aggressive. Mistakes in their tank setup can even stunt their growth as we explain here.

If you have the overall tank too hot then they will hide and try to climb out of the cage for relief, not an easy task since they don’t have sticky foot pads. (They are still good climbers – we show you what that means for you in this article!)

You might have a male and female leopard gecko intending them to have a companion once they mated. This works if you want to breed babies, but for the causal owner, the breeding time is when both genders display a lot of aggression.

For both male and female leopard geckos breeding time is a competition. Both sexes will become very territorial during this time. You can tell that it is mating time when they are wagging their tail, chasing after one another and even fighting.

This hostile behavior can be directed towards either gender or even those of the same gender. Males will fight other males that they view as competition, as will female leopard geckos.

The leopard gecko can seriously injure each other if they start to bite. If you have more than one gecko keep an extra tank on hand in case you need to separate them. They do fine on their own so the extra space won’t bother them.

After they have calmed down see about reintroducing them. Just keep an eye on them during this period in case they start fighting again. You might find that you prefer them separate after all.

As silly as it sounds this is an actual term for certain lady geckos that are more aggressive than others. There isn’t an exact determination as to why some female leopard geckos act this way.

Some believe that the temperament is due to higher temperatures during incubation, hence the name. While others call this the Alpha female. Whatever the reason once in a while you will connect with an overly aggressive female leopard gecko.

You can keep female geckos together, but you will have to be strategic. Female leopard geckos tend to be just as territorial as the male. Even towards other female geckos.

Since pairs of females tend to be tense in the leopard gecko world it’s best to introduce them together just when they hit maturity which is 40 grams.

If you are thinking about getting two female geckos, but want to hold out on the second one you might as well get them both now.

This way they will not have a concept of more space and will be less prone to defensive fighting. It will save you a lot of headaches later.

While the female hot heads get their name plenty of geckoes are just more aggressive. The best that you can do is try to introduce them upon maturity and hope that they get along. If they are harming each other in the cage get them separate tanks.

If it is in your heart to have two leopard geckos together talk to your local shop or see if you can find someone who has experience with the more aggressive type.

As far as lizards go the leopard gecko is a sweet easy to care for a baby that just needs a little consideration from time to time. They do perfectly fine on their own since in the wild they are not group animals.

So if it works best for you, don’t worry that you are blocking them from having social contact. As always respecting their individuality will give them the room to show their personality and connect to you as their owner.

Pierre And The ReptileCraze Team
Hey! My name is Pierre, and I am the owner of this website. Since I was a child, I have had an enormous interest in reptiles. I have kept chameleons, bearded dragons, leopard geckos, and many other reptiles. A team of pet enthusiasts and I created this website to help other reptile keepers take care of their pets!

Latest posts by Pierre And The ReptileCraze Team (see all)
Click here to cancel reply.