You stumble upon your leo profusely wagging his tail, and this happened a few times since you recently got him. While you’re completely mesmerized by this spectacular display, you’re also wondering whether he could be coming down with something?

What else could this possibly indicate?

Keep reading to learn more about tail wagging and what it means, as well as when you should be concerned!

Why Do Leopard Geckos Wag Their Tails?

Leopard geckos wag their tails to communicate how they are feeling. Different feelings are communicated with different types of tail wags. You will need to observe how your gecko wags its tail to understand what the situation is and what you can do to help or what you should not be doing.

Leopard geckos who wag their tails really slowly are asserting their presence to other geckos and are also indicating their awareness of them.

Leopard geckos may also proceed to position their bodies lower to the ground while they are wagging their tails slowly. Slow tail wagging could also signal excitement in a leopard gecko.

This type of tail wagging is commonly found in younger leopard geckos, but adult leopard geckos may also sometimes be found wagging its tail excitedly.

When leopard geckos are hunting or eating, excitement tail wagging can usually be observed. A leo will start off by slowly wagging its tail from side to side, and then just before it attacks the insect, they excitedly and quickly wag their tails.

Female and male leopard geckos alike are able to shake or wag their tails briskly. Though, only males would wag their tail very fast during courtship with a female.

If you spot females wagging their tails briskly during mating courtships, it might turn out that the female may actually be another male leopard gecko.

Leopard geckos use defensive tail wagging as a distraction to their potential attackers. Their heads are held high while they lower their bodies to the ground. This stance allows a leo to directly stare at their attackers.

By wagging their tails defensively, potential attackers are meant to be focusing on the leo’s tail, instead of its body. It is an attempt by the leo to get the attackers to head for their tails. The leopard gecko would then drop the tail and make its escape.

When leopard geckos wag their tails defensively at other geckos, immediate separation is required. Defensive tail wagging is used in response to potential predators on the verge of attack or other geckos they are suspicious of.

It could also be in relation to you surprising them as they have not yet properly familiarized themselves with you.

Do not even attempt to hold your leo if he is directing a defensive tail wagging stance towards you as you approach him. Your leo may certainly try to bite you!

In fact, any tiny movement could provoke a leo to attack and bite if he is made to feel scared, agitated, or threatened. Harmful injury may be prevented if these signs are identified immediately.

Your leo may not perceive you as a threat if you try and stand beside his habitat until he calms down. You should also regularly slowly lower your hand into the habitat from the other side of your leo’s cage and away from him.

Wait for your leo to either come closer and inspect your hand or hideaway. Either way, your leo will ultimately grow accustomed to your presence.

Females leopard geckos also defensively wagging their tails at male leos may not be feeling too certain about said male leopard gecko!

When leopard geckos are feeling defensive, agitated, threatened, and you notice them continuously wag their tails using the defensive stance, then it is most certainly putting a strain on your gecko.

The stress could be a result of the following factors, some of them noted previously:

Leopard geckos may also go into stress mode if they are constantly placed in a new environment. Leos may also not bond with you if they are not kept happy within their homes and provided with proper heating, lighting, food, and hydration.

As a result, they may become defensive and stressed each time you tried approaching them. 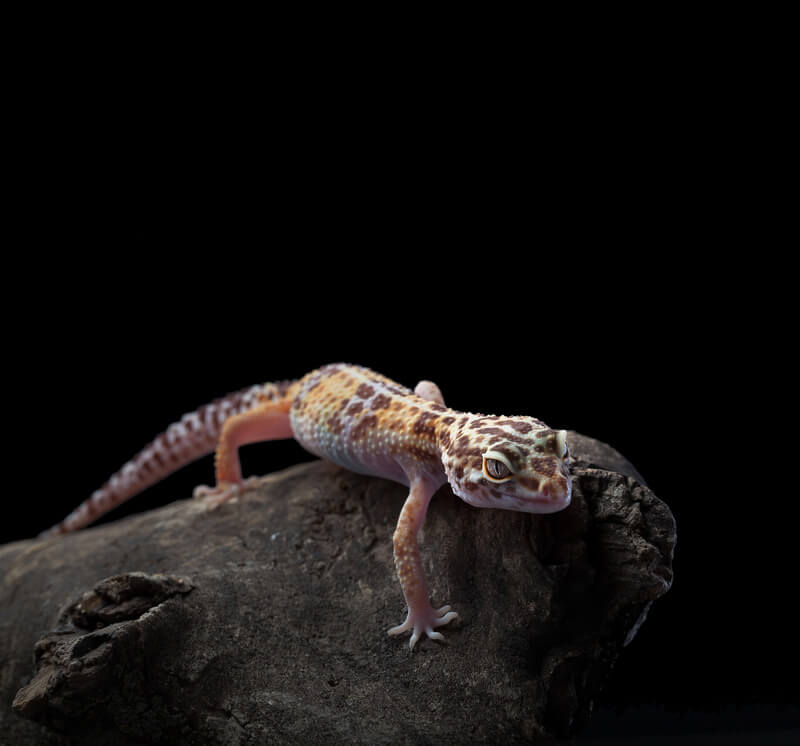 Tail loss may also result in an infection for your leopard gecko. The tail area may start to swell, ooze, and become red due to the infection and will require immediate treatment by a vet. Delayed treatment will potentially lead to death for your leo.

Keepers can make sure that leopard geckos are kept calm and stress is minimized by doing the following:

As the keeper of a leopard gecko, make sure that you are patient with him and always approach slowly. Abruptly approaching leos and frightening them are not ideal for their wellbeing.

Provide a habitat that is well set up for your leopard gecko and make sure he is happy by feeding him regularly, providing hydration, and bonding with him. Make sure that he does not perceive you as a threat. Handle them gently, with extra care, and avoid picking them up at the tail.

In general, do not keep leopard geckos together as they prefer solitude. Leopard geckos only interact to fulfill a breeding purpose in the wild. Otherwise, leopard geckos do not usually live together.

So, do not house two male leopard geckos together as they are extremely territorial creatures. Even two female leos may fight, it is best to provide each leo with their own personal space.

Tail wagging is used to communicate how your leopard gecko is feeling. Leos may display excitement, but constant defensive tail wagging should prompt you to determine any issues which are causing him stress.

Stress can easily be avoided for your leo, so he does not end up hurt or dropping his tail. Your leo may otherwise have to deal with critical health issues if stress is not minimized.