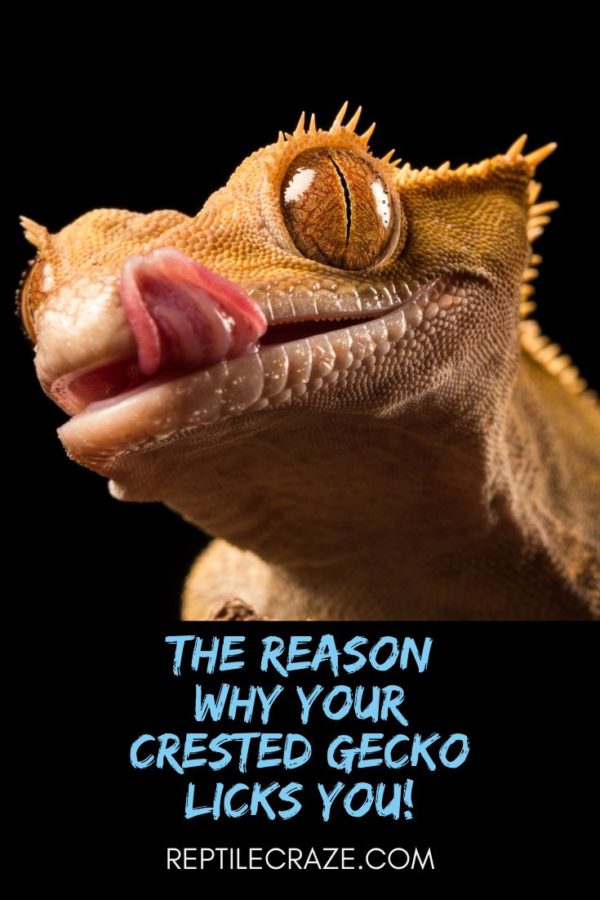 While crested geckos licking themselves – especially their eyes, is nothing unusual (for reasons we will explain later in the post), it is somewhat strange if your crested gecko begins to lick you all too frequently, whenever you handle it. No wonder then, owners of such crested geckos often ask themselves:

Why is my crested gecko licking me? As we delved deep into this pattern of behavior on the part of crested geckos, we realized that plain and simple curiosity drives your crested gecko to lick you. Remember that once out of its enclosure and onto you, it is an entirely different ambiance for your crested gecko. The different smell and taste, especially given the sweat on your skin, further fuels its tendency to lick.

In this post, we will look at other instances where crested geckos tend to display licking behavior, especially licking their own selves. This particularly includes licking their eyes, which is completely normal.

At the same time, there is a connection between mating and licking activity, which is also something we will explore in this post.

Many pet crested gecko owners mistake licking activity on the part of their pets as a sign of affection towards them; this belief really does not hold any merit.

Your crested gecko-like a lot of its reptilian cousins, does not really have the ability to display affection or emotion. We explain what that means and what you can expect from your Crested gecko in this article!

Any licking behavior that it shows towards you would not have anything to do with a special bond that it has developed with you.

Instead, it is more likely your crested gecko is merely exploring the different “terrain” you have now exposed it to, once out of its habitat and onto you.

Licking as an Exploratory Mechanism

A lot of the licking activity showcased by crested geckos is simply a manifestation of their exploratory tendencies, especially when it comes to food. That is the reason you will witness cresties licking just about anything coming their way, be it:

Their curiosity is especially aroused to confirm if the object in front of them is actually edible or not, and the best way to do so is to give it a nice lick!

Crested geckos do not have eyelids and therefore cannot blink. The only protection that their eyeballs have is tiny, transparent spectacles on them. These spectacles need to be cleaned from time to time and the best way to do so is for cresties to lick them.

That is precisely the reason for which you see crested geckos licking their eyes from time to time – it’s merely their cleaning regimen! Moreover, this action lends much-needed moisture to the spectacles as well.

Interestingly, this whole phenomenon of crested geckos licking their eyes has become a huge point of interest and curiosity among crested gecko enthusiasts.

In fact, if you are an owner of a crested gecko, don’t be surprised if you have folks coming over simply to observe your crestie licking its eyes! Online too, you will find videos galore that showcase crested geckos licking their eyes. 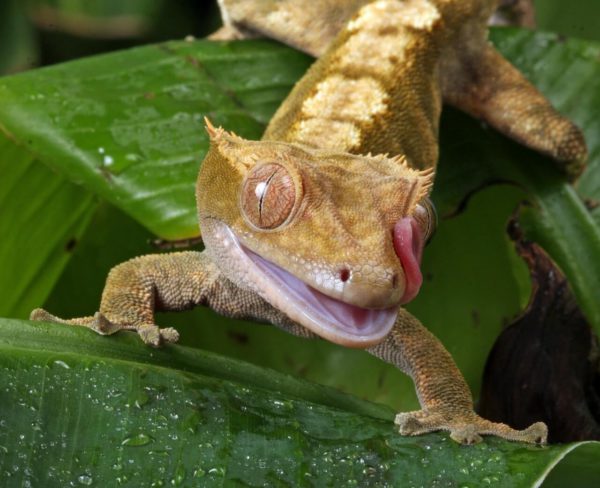 A Licking Crestie is an Unstressed Gecko!

Among the many signs of a stressed-out crested gecko is one that does not exhibit usual behavior for it, be it eating, pooping, moving out unabashedly, and yes, licking! So if your crestie is not licking around the way it is usually expected to, it may be a sign of stress.

That is the reason we would stress (no pun intended!) that you be more concerned about your crested gecko NOT licking around than if it does; as we have asserted above, it is largely its inherent curiosity which compels it to lick objects around it – you included.

So when it does so, it is completely fine but in case it does not, it may be a sign of stress that you may want to look into and address.

In extreme cases, it may even be an indication of poor health in which case you would want to take your crestie to the vet as soon as possible without any delay whatsoever.

If your Crested gecko’s mouth is open for a long while, read our article on that here as this can be an indication for illness.

Male crested geckos do have a tendency to lick their hemipenis. While this may be a sign of sexual desire, it may not always be so. For instance, your male crestie may simply be cleaning its genitals.

After all, sexual desires and instincts in your crestie are akin to most other species, us humans included. So the ideal scenario in this situation would be for you to pair your male crested gecko with a female one.

Alongside, you also need to be well prepared for a large brood of baby cresties which may come your way all too soon and suddenly!

Are you prepared to provide for and take care of so many cresties? Remember that when they are young, the care and attention they require is even higher.

Yes, you could always consider giving them away to friends and family members who might be yearning for a pet crestie themselves.

At the end of the day, whatever your plan may be, prepare for it in case you see your male crested gecko clearly yearning for female company and you give in to his coital desires!

A final point of note would be that male cresties tend to lick their hemipenis after mating as well. This is simply to ease the retraction of the hemipenis. So don’t think your crestie has suddenly taken on Himeros’ mantle (and just can’t have enough of it)!

It is absolutely typical of your crested gecko to lick around; this is a sign of its curiosity instincts in action. At the same time, it is really not a sign of love or affection – which you may perceive when it licks you.

It is simply using its sense of smell to explore things around, which it adds to by licking, especially since it tends to be rather curious about items it could eat.

Alongside, some of the licking activity – such as licking its eyeballs, is for its own good since it lacks eyelids. Further, males may tend to lick their hemipenis when keen on mating (or after mating).

Having got a fairly good perspective on why your crested gecko licks you (or itself!), you might also want to know: