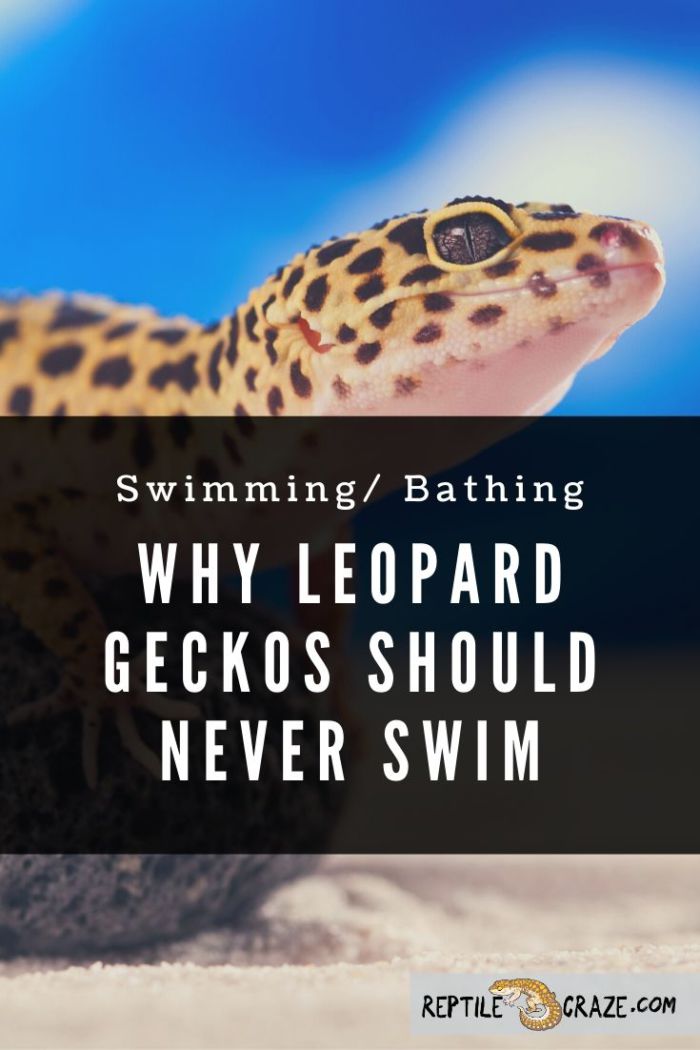 Are you planning to put a pool-like water dish in your leopard gecko enclosure? Surely, that will look nice and you also get to enjoy as you watch your leopard geckos swim in the water. Here comes the bad news, you might want to hold that idea as doing so will be dangerous for them.

The first question that you should ask is, can leopard geckos swim?

Leopard geckos cannot actually swim—they float. You should never let them swim as the risk of drowning is high. Further, being in water stresses them and might lead to other health problems. In fact, they do not actually need baths, misting the enclosure and your geckos are more than enough.

Leopard geckos have a love and hate relationship with water. Love, as they (obviously) need to drink in order to hydrate their bodies which also helps in regulating their body temperature. Hate, as they generally do not like water.

The reason behind this is that in the wild, reptiles such as the leopard gecko stay in dry and warm areas. As much as possible, they avoid wet environments. They only expose themselves to such for the sake of temperature regulation.

When Do Leopard Geckos Need Water?

Of course, leopard geckos cannot do away with water. Even though they hate going into the water, there are cases when they really need to. Let us take a look at those instances.

This is pretty self-explanatory as they need water to survive. But what is interesting is the fact that leopard geckos mainly tend to their hydration needs via their food and not from water.

They only drink water when there is not a lot of moisture or rather “juices” from the insect that they just ate.

This is good to note as you can gauge if you are gut loading your insects properly. If your leopard gecko is drinking more often even after feeding him, then this means that the insects that you are feeding him lack in moisture.

Therefore, you can make the necessary adjustments in terms of the preparation of the food.

Do not forget to always put fresh water in their water dish. Sometimes, the substrate will find its way into the dish thus drying it up which leaves your leopard gecko thirsty. 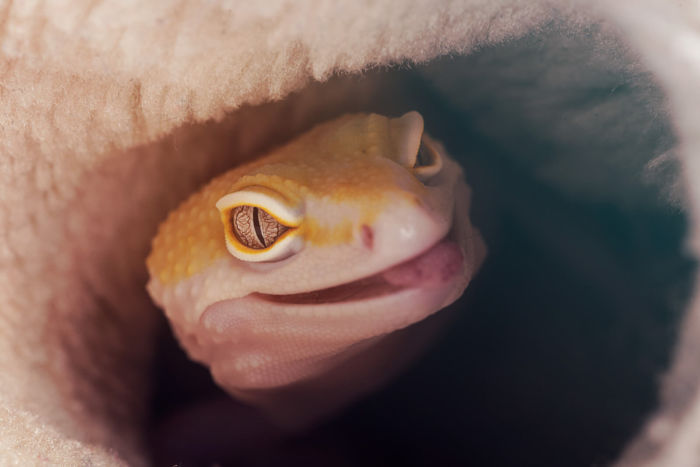 When it comes to shedding, leopard geckos can have a tough time. It is either they cannot scratch hard enough against a rough surface or their old “skin” simply does not want to go. This is the time when they try and soak themselves in water.

Take note, they just soak, but they do not stay in the water and chill with a cricket margarita. Kidding aside, the moisture from the water will help the shedding process to go faster and easier as it acts as a lubricant between the old and new skin.

If you see that your leopard gecko is having a hard time with his shed that it already hinders his daily activities, this is the time where you can place him in a shallow dish with water and let him do his thing. Better yet, so as not to stress him, you can simply spray water on his body.

On the other hand, some owners tend to give their leopard geckos a bath. As much as possible, try to let them be and sort out their own shedding. They do not need baths so doing so will put unnecessary stress on them.

In cases that they look so dirty, try to fight the urge to bathe them, as more often than not, they are still okay. Only interfere if they look so messy that it affects their activities.

By the way, here is what it means if your Leopard gecko eats its own shed skin!

Leopard geckos have the ability to thermoregulate. This is where they try to readjust their body’s temperature to reach a certain level that is comfortable to them.

A lot of owners have noticed that their leopard geckos tend to drink water and even soak in it before they run off to their hiding spot to thermoregulate.

There is still no scientific explanation for this, but logic dictates that they may be doing this as a supplement to their thermoregulation especially when they are trying to cool down.

You might want to be on the lookout when your leopard gecko does this as they are so adorable to look at. Why is that? Imagine this, he will stealthily approach the water dish and immediately soak his legs in the water.

He might even shiver and be startled. After that, he will scurry away.

This is why it is important to place the water dish in the cooler areas of the enclosure. In this way, the soaking of your leopard gecko will not be in vain as his hiding spot is also most likely in the cooler area.

If you place the water dish in the warmer area, then it is a long run to his hiding spot. In the process, the moisture that is left on his body would have turned warm, causing him to exert more effort when he thermoregulates.

The Dangers Of Letting Your Leopard Gecko Swim

Let us now take a look at the dangers of letting your leopard gecko swim in a body of water. These are not meant to scare you, rather, we are discussing this so that you will be more aware of what might happen in the enclosure as far as water is concerned.

As we have mentioned earlier, they cannot actually swim, but what they do is more of floating on water. Even if they look so effortless, of course, just like humans, there is also some effort that is exerted in order to stay afloat.

Therefore, they cannot stay afloat on the water for too long. They will either get tired and eventually sink. Some owners have also shared stories about their leopard geckos falling in their water dishes and trying desperately to stay afloat while facing down.

This is extremely dangerous as they are not used to dealing with this type of situation. They will either panic or keep on floating even though they are facing the wrong way. Both of these instances result in drowning. 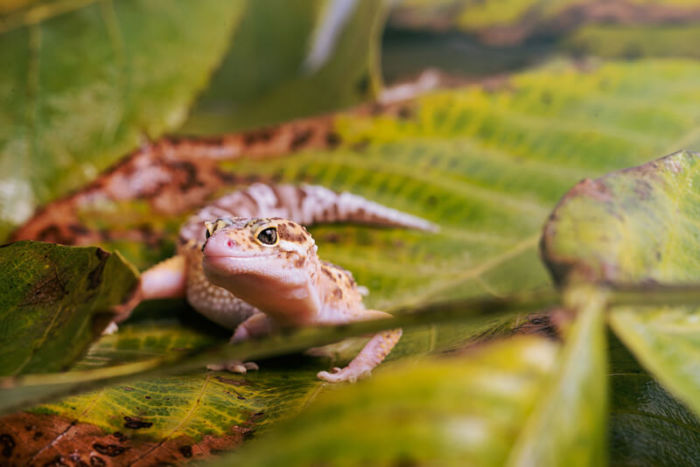 It is still unexplained why leopard geckos tend to thermoregulate when their bodies reach extreme temperatures. By temperature, we are referring to both cold and hot temperatures.

In the event that they got caught up in the water for far too long, they will only move to warmer areas of the enclosure when their body is already too cold. When this happens occasionally, there is nothing to worry about.

However, if your leopard gecko does this often, this can cause him to have immunity issues.

It can even stunt a leopard gecko’s growth. Read this article to learn what stops a healthy growth in leopard geckos.

It is a given that exposure to too much water will stress your leopard gecko as they practically hate being exposed to it. What is worse is that their tails might drop due to severe stress. Not only that but they can also refuse to eat and refuse to leave their hiding spot.

If they get too stressed when it comes to water, it is a cause of concern as they may fail to drink water on their own. Therefore, you should never do anything that will make them associate water with stress, like spraying them with water too much or bathing them for no reason.

A leopard gecko’s body is not meant for swimming. Therefore, their organs are not equipped to handle processes that are required for swimming.

This is also in relation to exposure to extreme temperatures. Just like humans, they will get weak and eventually sick when they are constantly exposed to varying temperatures. Imagine your leopard gecko walking around his enclosure with tissue in hand as he has a runny nose.

But in all seriousness, their lungs can only take so much of the exposure to extreme temperature and it will eventually give out.

When this happens, you really have to rush to the vet for consultation. But usually, the vet will be pessimistic as respiratory problems in geckos immediately mean that a year has been cut off of their life span. Yikes!

Have we scared you enough? If you are, then do not be scared as there are ways that you can prevent these scary things from happening. Take a look at the following:

Pierre And The ReptileCraze Team
Hey! My name is Pierre, and I am the owner of this website. Since I was a child, I have had an enormous interest in reptiles. I have kept chameleons, bearded dragons, leopard geckos, and many other reptiles. A team of pet enthusiasts and I created this website to help other reptile keepers take care of their pets!

Latest posts by Pierre And The ReptileCraze Team (see all)
Click here to cancel reply.

Pierre And The ReptileCraze Team

I recommend having a look at our article on that here: Can leopard geckos swim?